At the heart of every solar panel are silicon wafers. At it starts, the wafers manufacturing benefits from the semiconductor industry where the multi-wire sawing process was well established as proven technology. The process is based on a single wire passing in many hundreds of windings around a set of guide rolls to create a wire web. The wire moves continuously in a single direction at speeds of around 20m/s. The bricks are forced down onto the moving wire web while abrasive slurry of polyethylene glycol (PEG) and silicon carbide (SiC) particles is being homogeneously applied to the web in front of the brick. The wire and the carrier fluid transports the abrasive particles to the brick, where the forces from the wire lead to a three-body abrasion process between the particles, the wire and the silicon brick. The conversion cost from the bricks to the wafers is the second high cost after the encapsulation process. Moreover, the major cost is mainly due to the consumables use, the kerf loss that represents about 50% of the pure polysilicon used to make a wafer and the overall throughput.

Since the development of solar energy and the panels that drive the systems, three main routes to cost saving have been followed: the reduction of the materials usage that was improved from over 30 g/Wp in the early 2000 to less than 6 g/Wp today, thanks to thin wafers and thin wire. The wire saw technology was also improved allowing high throughput from few hundred to several thousand wafers/hour. The aqueous solution that represents the slurry, it’s more and more recycled. Today we regenerate the slurry with less than 10% of bright new slurry. Nevertheless, in the race for cost reduction, different new technologies merged. The most mature one is currently, an evolution of the proven slurry based wire sawing technology. The diamond wire sawing technology proposed by Meyer Burger among others. Since a couple of years, it’s continuously gaining market share. It’s advantages are multiples and from different point of view. Economical: the slurry is replaced by a diamond wire that generates higher output through a very fast cutting speed, the wafers doesn’t need the deep and long cleaning process/detergents usage etc… Technical : no more slurry management. Moreover, the diamond wire process is environmentally friendly

Aside, other technologies are still either at pilot line level like the 1366’s Direct 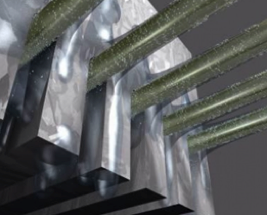 The continuous wafer synthesis technology developed by Fraunhofer CMI is based on crystal growth by mean of CVD process as well as the Twin Creeks’ proprietary Hyperion process, is based on a beam of hydrogen ions that bombards a thick disks of crystalline silicon after heating in furnace a thin layer of 20 µm of silicon is peeled off the surface of each substrate. Both technologies can produce very thin wafers with no loss of silicon. However, these technologies are still at laboratory level and need further development before their industrialization. With the expected market development, capacity increase is needed and will probably open opportunities for new and innovative technologies with high potential of cost reduction especially the ‘one step process’ ones.