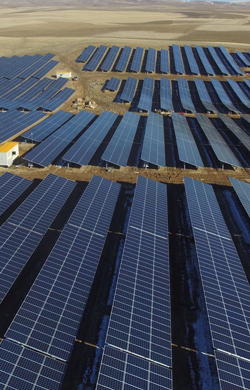 He attributes its big market share here to the company, the Energy Technology business unit of Körber Automation, to manufacturing locally turnkey inverter stations in the country.

“It wasn’t particularly easy,” admits Bittler, regarding setting up local production. “The market grew slowly at the beginning, but now 2016 is looking pretty good.” He adds that

its inverters will be used in Turkish projects generating 400-500MW this year, and projects have been tendered for additional projects to be built in the next two years. “The licensing process is still going on, and they’re working on all the authorizations,” he explains, adding that if everything works out well the first projects might be online by Q4 this year.

LTI ReEnergy is finding interest in its inverters from both licensed and unlicensed solar projects in Turkey.

Financing of solar projects is coming from Turkish or Middle Eastern sources, as opposed to European investors, he notes.

Due to the use of globally available standard components, local production also ensures reduce transport costs and shorter delivery times.

LTI ReEnergy plans to introduce what it learned in Turkey about setting up local production to the U.S., and then later in India and Latin America.

“LTI has identified a production partner on the US’s West Coast, and factory inspection is being finalized,” reveals Bittler. “Containers are planned to be shipped from the partner’s premises towards the end of Q2.”