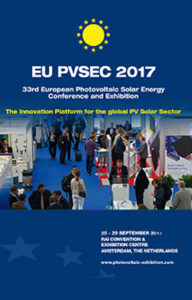 Over 1250 abstracts have been received for the Call for Papers of the 33rd European Photovoltaic Solar Energy Conference and Exhibition (EU PVSEC) in Amsterdam, The Netherlands, from 25 – 29 September 2017.

Arno Smets, General Chairman of the upcoming EU PVSEC 2017 commented, “I am very happy with the large number of abstracts submitted. The submissions demonstrate that the interest in photovoltaics keeps on growing.”

The abstracts were received from coresponding authors in 70 countries. Most abstracts were handed in from Germany with a share of around 21%, followed by the host country The Netherlands (8%). Around half of the top 10 respondents came from European countries, including France (5%), Italy (4%), Switzerland (4%) and Spain (3%). Scientists from Asia’s leading PV nations have shown big interest in EU PVSEC as well, with most abstracts coming from Japan (5%), China (4%), Korea (3%), Taiwan (3%) and India (3%). Further top contributors are the US (4%) and from North Africa, Morocco (4%), a pioneer in off-grid solar and currently developing some of the most ambitious utility-scale solar power projects on that continent.

If you would like to share your latest results and insights, you have still the opportunity to submit a late abstract.