Full House in Brooklyn at the Intersolar Summit

Around 400 market experts, policymakers and industry players along the entire value chain discussed the region’s potential as a paver for solar and energy storage market development at the Intersolar Summit USA East in Brooklyn on March 24, 2016. Keynote speeches from local solar champions such as New York State Senator Kevin S. Parker and Richard Kauffman, Chairman of Energy and Finance for New York at the Office of the Governor of New York, set the tone for an engaging deep-dive into the status-quo and future perspectives of solar and energy storage. Besides a significant increase in attendance compared to last year’s show, the event was supported by 22 exhibitors showcasing latest product innovations.
Pforzheim / Brooklyn, New York – April 6, 2016. The event kicked-off with impressive statistics on the state of the solar industry from Dr. Florian Wessendorf, Managing Director of Solar Promotion International GmbH. With projections of reaching 80% global grid parity in the upcoming two years, Dr. Wessendorf pointed out that it is unlikely these growth trends will reverse. New York State Senator Kevin S. Parker spoke enthusiastically about the opportunity to expand New York’s solar footprint, leading what he called the “next big economic opportunity” for the state. He acknowledged that solar power is especially valuable when considering the region’s high energy costs. New York State Assembly woman Latrice Walker echoed the Senator’s drive for innovation specifically in Brooklyn, where energy challenges for public housing residents can be mitigated with solar projects.

Richard Kauffman reiterated the excitement for solar opportunities in the State of New York, pointing out that solar installations in New York have grown 600 percent since 2012. The chairman cited trends, such as the rise of community solar, partnering with utilities, and reducing gaps in financing as key areas of focus for the continued progress of solar in New York.

During the plenary session in the morning, all experts agreed that signs in the Northeast states clearly point towards industry growth; however, a close collaboration between all stakeholders along the entire value chain is essential to successfully achieve the long overdue energy transition. Moreover, the regionally-focused “Northeast Solar Market Outlook” panel underlined the importance for an accurate analysis of cost benefits when considering the future of net metering and its impact on installers and utilities. Minh Le, Deputy Director of Solar Energy Technologies at the U.S. Department of Energy, referred to further optimization potentials including better support for smart grids, energy storage as well as access to capital and workforce development.

For the afternoon session, the conference split into two issue-focused tracks. Renowned industry experts shared insights into the state of energy storage as well as clean energy financing trends.

Within his keynote address, Dr. Alex Levran, Senior Vice President and Head of Global Solar Industry Initiative of ABB, pointed out that current growth drivers constitute of an increasing power demand in emerging economies and the desire for a more balanced energy mix. Moreover, factors such as the preservation of fossil fuels, access to electricity, grid parity as well as economic viability do also contribute to the positive developments. Technological advancements are vital to support these aspects, particularly the combination of solar and storage will be the emerging key element of the future global energy mix.

According to the two leading global researchers, EuPD Research and Greentech Media, about one third of the U.S. installers already carry energy storage solutions in their portfolio, of which 96 % of 2015 deployments were made of Lithium-Ion technologies. Nevertheless, all experts agreed that energy storage is not only about the technology itself, but also how to effectively finance it. Another key takeaway was that the objectives of customers vary, with certain players seeking an “emotional” buy in order to move away from grid reliance, while others can take advantage of true cost savings through storage on a large scale.

The second afternoon conference track purely focused on clean energy financing trends and investment opportunities. According to keynote speaker Michael Eckhart, Managing Director, Global Head of Environmental Finance Corporate and Investment Banking at Citigroup, it is all about financial innovations in this decade. “We are approximately 40 years into a 100-year transition to clean energy”, he added. Furthermore, it’s time to start thinking about the utility 2.0. Fundamental changes regarding the handling of energy can also be noticed – representative examples are active load management and the establishment of micro-grids.

It became clear, that growth in the renewable energy sector would not exist without financial innovation. The industry has done a great job thus far of reducing the barriers to financing and the risks associated with solar investments. In this respect, continuous and ongoing education among investors is the key to enhance confidence and minimize risks.

The day was topped off by the exclusive networking reception “Solar Futures”, hosted by New York State Senator Kevin S. Parker at the historic Brooklyn Borough Hall, where delegates took advantage of high-level networking opportunities and reflected on the conference findings. 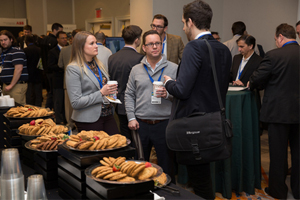 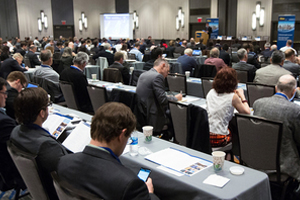 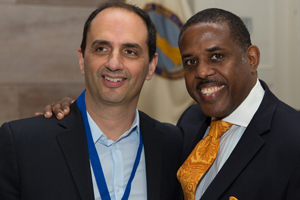